Highlanders Vs Rebels Match In Doubt 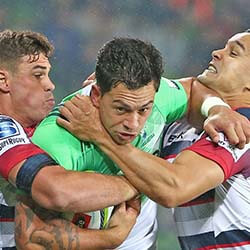 The upcoming Super Rugby Transtasman match between the Rebels and the Highlanders is hanging in the balance. With the announcement of the pause of the travel bubble between Victoria and New Zealand, it is uncertain what will happen with regards to this widely anticipated event.

Chris Hipkins, the COVID-19 Minister, confirmed that the bubble between New Zealand and Australia’s Victoria state would be suspended for a minimum of 72 hours. This is due to five new cases of the Coronavirus being reported in Melbourne over the past two days.

Many are under the assumption that the Rebels have been holding meetings to discuss what their next steps should be. The team is also awaiting further advice from the Australian Government. At this point, it seems unlikely that the match’s host will be reversed. This option would then mean that the Highlanders have to travel to Victoria for the contest.

This disruption is the second major virus-related one that the Rebels have faced this year. The team was previously forced out of Victoria because of a spike in cases.

The Highlanders have been approached for comment but have yet to provide one.

The pause of the travel bubble will be under constant review. A spokesperson for the Rebels confirmed that the club had left the country following its defeat by the Hurricanes in Wellington over the weekend. The spokesperson added that the team will wait for the bubble to reopen before returning home.