Hunt Back In The Game For Bledisloe

Hunt A Confident Mascot For His Team 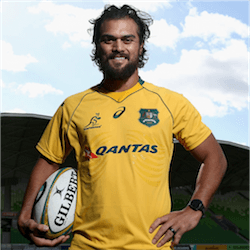 New Zealand had better keep their soft spots covered if Karmichael Hunt’s word is to be taken seriously ahead of the 3rd Bledisloe Cup to be played in Brisbane.  Hunt’s comeback from an ankle injury that was sustained on July 14th, one that saw him missing out on the Rugby Championship in its entirety, is bound to be a breath of fresh air for Wallabies coach Michael Cheika.

All eyes were on Hunt during Sunday’s Brisbane City/Sydney Rays stand-off at Pittwater park and it seems as if the time spent recovering has been well worth the wait.  Hunt too, seemed relieved and elated at the physicality of his performance on Sunday, saying that training was all good and well but the true measure of progress was only to be found in a game.  Hunt reports having been nervous at first, but soon discovered that his ankle would not be holding him back and that it was going to be a good game of Footy.

Simply Footy Is What It’s All About

Hunt now has his sights firmly set on next week’s rugby test and is a firm believer that the Wallabies are strong contenders for beating New Zealand this time round.  Hunt will be playing his second game since his comeback on the weekend, before joining the Wallabies squad for Bledisloe.

Hunt seemed confident that he was ready to face the battle head on if so required by Cheika, saying that he was very satisfied with where he was at the moment, despite his having only 40 minutes of play to go on since his return from injury off-time.

Hunt had played his way into Cheika’s original selection for Bledisloe back in August, but was forced into a late withdrawal by misfortune.  Hunt is a firm believer that the group that will be facing New Zealand in the 3rd game is a world removed from the one who played in round 1.  Speaking to the press, Hunt said that for the first time he had a bird’s eye view and was on the outside looking in, and that this made for a lot of clarity of perspective and confirmed his opinion that now was great time to get involved again.

For all his wisdom, Hunt will still have to prove his worth and the moment of truth will be the weekend’s playoff for a Wallabies utility spot alongside Samu Kerevi.   Hunt has said that he would not be aiming his energy at attempting to score more touches than Kerevi but simply wanted to get out there and play footy.