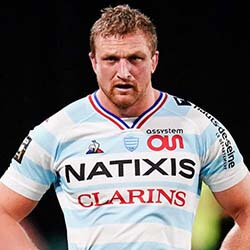 Dominic Bird has returned from France after spending time with Racing Metro. He has signed a contract with Wellington for the 2021 NPC and the Hurricanes of the 2022 Super Rugby competition.

Bird made his rugby debut while at Lincoln University, playing for Canterbury. He then went on to play for the Crusaders from 2013-15 and Chiefs from 2016-18. He also represented the All Blacks in Japan and Scotland in 2013 and 2014, respectively.

After signing with the French team in 2018, Bird is excited to be returning to New Zealand and playing in the Super Rugby next year. While he had a great time in France, playing some of his best rugby while there, he looks forward to pushing himself in the Super Rugby and taking the Hurricanes to new heights.

The Hurricanes are looking forward to welcoming Bird back and seeing him show off his experience while playing for the Wellington Lions this year before moving over to the Hurricanes next year.

It is evident that Bird is excited to prove himself as he once again plays for New Zealand. The experience that he has built off his time in France will benefit the teams that he plays for and will give him the skill needed to take on some of rugby’s toughest challenges. It truly is an exciting time for New Zealand rugby.