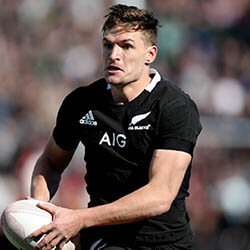 Star All Blacks winger George Bridge’s recent chest injury sustained during a training session has him staring down a 6 months-long rugby holiday barrel. This also means he won’t be joining the rest of his team for the second Bledisloe Cup test against Australia.

Information tweeted on Thursday by the New Zealand national side confirmed the injury to have happened during field training on Wednesday. Though no further details were provided at the time, Bridge is understood to have either sprained or torn a pectoral muscle.

Though certainly lamentable – especially given the leading role he played in Aaron Smith’s try in the first test in Wellington on the weekend – his absence does create an exciting opportunity for Auckland wing Caleb Clarke in terms of picked more often in future. Clarke during the second half of Sunday’s test impressed the national side with his quick-thinking and speed.

Clarke came into Sunday’s match in the place of Damien McKenzie and made the absolute most of the little over 10 minutes remaining on the clock. Though left with limited time to make an impression, Clarke wasted no time getting into form hinting at the raw and devastating power that saw him tagged a leading talent in Super Rugby Aotearoa.

So impressive was the 21-year-old’s performance at Eden Park, that he’s been labeled a “weapon” by Blues teammate and former AB hooker James Parsons – a weapon and a threat when having a ball in hand.

Sunday’s test at Eden Park was Clarke’s test debut with the national side.