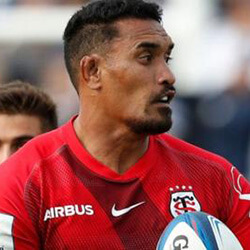 Toulouse back rower Jerome Kaino has been issued a five-week ban after he performed a dangerous tackle on Bath’s Jamie Roberts during their Champions Cup game.

The 25-year-old player, who has won 81 caps in the All Blacks in the past, was given a yellow card for the tackle, which forced Roberts off of the field due to a head injury. But a disciplinary panel has now taken the time to judge the tackle, and has instead decided to issue Kaino with a red card.

Kaino was was then given a six-week suspension, which was eventually reduced to five weeks thanks to the good conduct of the hearing. The tackle and subsequent banning has created plenty of controversy in the interim, with players and officials arguing on whether the tackle actually constituted any foul play.

Despite failing to pass his injury assessment on the day, Wales’ 94-time capped Lions centre Roberts has now been given the green light to return for the Bath in their game against the Wasps. Bath head coach Todd Blackadder has told reporters that they still have to follow protocol, but that Roberts has come through nonetheless. He added that the player is now on track and is available to play in their next game.

Many feel that this latest incident is why rugby should be subject to a number of law changes, especially when it comes to tackle height – which has been lowered as per a new trial this season.