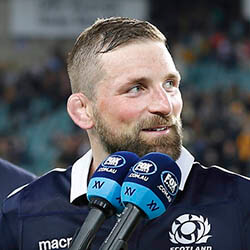 Former Scotland captain John Barclay has retired from his position after achieving 76 caps. The 33-year-old Edinburgh-based forward has claimed 76 caps and Three World Cups during his career, and has stated that he is proud to have been able to live out his boyhood dream as part of his retirement announcement.

Barclay had made his debut against New Zealand while playing Murrayfield during the 2007 World Cup, and had gone on to captain his team for their final appearance against Russia in Japan during their time in October this year. Taking to social media, the forward said that all good things had to come to an end, and that it hadn’t been an easy decision for him to make, adding that playing for his team was the culmination of years of dedication and hard work, but one of his very best achievements. He continued, saying that it had been a privilege to wear the jersey, and that not many people are able to live their boyhood dreams.

Born in Hong Kong, Barclay shot to international fame during his eight years playing in Glasgow, and was part of the country’s famed “Killer B’s” back row, where he played alongside Johnnie Beattie and Kelly Brown. He would go on to join the Scarlets in 2013, where he assisted the Welsh side to the Pro12 win in 2017, before moving to Edinburgh. A damaged Achilles forced him to delay until 2017, but was able to join the World Cup squad in 2019.