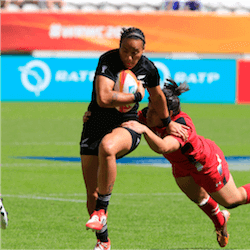 Wales has suffered a heavy defeat at the hands of former World Cup champions New Zealand, during the opening match of the 2017 Women’s Rugby World Cup.  Wales did not go down for a lack of trying and were seemingly prepped for disaster from the very start – having drawn alongside four times champions New Zealand and runners-up Canada to start in what many deem to be the most difficult group possible.

The expectations for the Welch side had been low to begin with – having managed to win once only during this year’s Six Nations.  The battle has been a physical as well as a psychological one for Wales from the word go – not once before having managed to bet the Black Ferns.  Yet they remained hopeful that they would be able to beat the odds.

Inspired And Ready To Make Good

New Zealand has been ready and rearing to make good after having been defeated by Ireland in the 2014 World Cup fixture – bringing to an end a 20-match winning streak.  The Black Ferns were determined not to allow history to repeat itself in Dublin.

Wales Disappointed By Outcome For Many Reasons

Wales coach Rowland Phillips has said to BBC Wales that he and the team were disappointed by the results, and that the squad’s performance deserved and warranted a better score altogether.  He went on to say that the upside was that they had not only scored two tries – but had also created many opportunities for more, but had unfortunately failed to seize those.  He also said that it was important to focus on the performance as a positive, and to keep building through the competition.

Home turf hosts Ireland had to pull many a stunt in order to finally beat Australia on the opening day of the 2017 Women’s Rugby World Cup.  Both teams brought their best performance by far – and it shows in the 19-17 final score.  At one point it actually looked as if the victory would swing in Australia’s favour, but it was ultimately the 2017 hosts who managed to seal the deal.

Australian captain Shannon Parry seemed both pleased and disappointed, saying that it had been a very physical encounter, but a magnificent one at that and that the 2 points loss would become a starting point from which to build and grow.

The team bound to be most disappointed by Day 1 is no doubt Hong Kong – having suffered an embarrassing 98-0 loss against Canada.