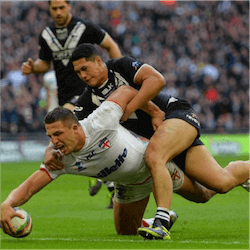 A second thwarting and almost awkward performance in succession has seen the Kiwi’s out the Rugby League World Cup door and out into the street of despair.  New Zealand Rugby League is obviously in need of many things, with most in agreement that one of which is a total overhaul in the way of leadership.    More specifically, in the way of David Kidwell.

The loss to Fiji was the final straw in the hat of the embarrassing affair, with the media and fans crying demise at equally alarming volumes.  Trying to put a positive spin on an ugly defeat was perhaps not the best course of action for Kidwell to take.  Especially when considering that no job is permanent and with the rugby justice mob calling loudly for your head.

New Zealand Rugby League chief executive Alex Hayton has sided with the media and the fans on this one, saying that Kiwi rugby was in a state of despair and that he feared that the brand had indeed been damaged.  Wide-spread criticism on social media apparently has Kidwell thinking again, prompting him to announce that he was now strongly reconsidering his future, with his current contract set to expire in January.

Judging by the strong reaction on social media, David Kidwell isn’t the only one reconsidering David Kidwell’s future.

New Zealand has not fared well at all under Kidwell’s tutelage, managing only 3 wins out of 10 international games since he was appointed coach last year.  Despite the overwhelming odds against him, Kidwell has dismissed calls for his head, saying that this type of reaction was always temporary.  Kidwell went on to bewail the lack of support received from fans during the World Cup campaign, saying that the world (presumably the rugby world) was a negative place to be and that support from New Zealanders was necessary and helps a great deal.

Whether captain Adam Blair feels that he had a hand in the try-less failure against Fiji on Saturday or whether he’s just the loyal type sticking by his leader’s side is anyone’s guess, but he too, has lashed out at the media and New Zealand fans, saying that the media and the fans actually wanted the Kiwi’s to fail.

Speaking to the press, Blair said that it was hard when you were giving it your all to bring games back that were worthy of watching only to be met by a negative response from the very people that you were bringing those games back for.