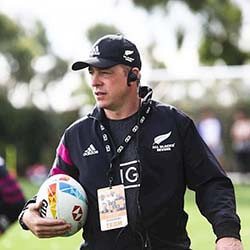 Clark Laidlaw, who spent time playing for Livorno, Borders and Scotland before taking up his All Blacks Sevens Coach position, is a hopeful man. He’s holding on to the possibility of recruiting the services of a number of Super Rugby players for the 2020 Summer Olympics, set to unfold from the 23rd of July 2021 to the 8th of August in Tokyo, Japan.

Four of the five Super Rugby teams for New Zealand had originally committed to taking part in the Sevens system, but then the novel coronavirus COVID-19 reared its ugly head. The uncertainty which then engulfed the international sports scene saw the Games of the XXXII Olympiad pushed back a year, leaving these players free to engage in Super Rugby Aotearoa. This 10-week, round robin tournament took place between the 13th of June and the 16th of August 2020, with the Crusaders named the champions.

It’s yet to be determined whether or not the same players will be available for the Sevens with the rescheduled Tokyo Games coming up later on in 2021. Laidlaw has gone on the record as saying he hopes that this will be the case and that talks thus far indicate that this will be the likely outcome.

Laidlaw recently commented that matters will only become clearer when some time has passed. Laidlaw’s initial picks included the Blues’ Caleb Clarke, the Chiefs’ Etene Nanai-Seturo, the Highlanders’ Scott Gregory, and Salesi Rayasi from the Hurricanes.