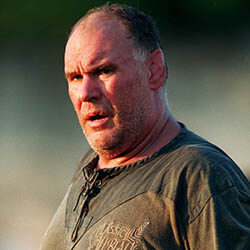 Tributes are streaming in on social media following the death of former All Blacks lock and legendary rugby-man Andy Haden. He was 69.

Diagnosed with chronic lymphocytic leukaemia in 2003, Haden lost a long and protracted battle with the illness at his home early on Wednesday morning. He only recently returned home after having received critical in-hospital palliative care.

Haden play more than 100 games for his country and also played for Auckland at provincial level, as well as for Ponsonby at club-level. The rugby legend was a manager right down to his very last fibre, and even represented supermodel Rachel Hunter during her early career just starting out on the catwalk.

Haden in 1972, during a tour against New York Metropolitan, played that year in the Big Apple, put in his inaugural appearance as a guest member of the formidable All Blacks. He was but a youthful 21 years old at the time.  It would be 5 more years before Andy Haden would make his test debut as a full-blown member of his beloved New Zealand All Blacks – against a touring Lions side. The former lock played his final game for New Zealand in 1985 and retired from playing professionally one year later.

Prolific Aussie player David Campese described Haden’s legacy as one that will forever remain a significant and important part of the history of the All Blacks and of world rugby. And former Springboks World Cup forward Schalk Burger Snr wrote a moving tribute to him as having been a feared and passionate player on the field, and a good friend away from it.