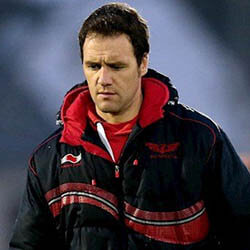 Mark Jones, formerly of Wales’ Rygbi Gogledd Cymru, will be joining the Crusaders for the next two years as part of a new coaching gig. He stepped down from the RGC after three years as head coach and mentored Namibia’s back players at the Rugby World Cup last year. He joined Phil Davies for that job and formed part of a squad of instructors that included Dale McIntosh and Wayne Proctor.

Jones is now set to join Scott Robertson’s backroom staff. Robertson has coached the Crusaders to three Super Rugby titles in a row and remains there under contract until the 2021 season draws to a close.

Jones, speaking to BBC Sport Wales, said that this is a dream job for anyone. He stated that if you’re on the receiving end of a call from the Crusaders you step up, you don’t let an opportunity this prestigious pass you by! He said that he is very excited about being associated with a team as universally respected as this one is and that he’s eager to learn what he can from them.

Jones said that Robertson has done a great job, and not just in terms of collecting trophies over the last few seasons but in developing players and coaches into the best they can be as well. He added that this was naturally one of his goals and that he’s looking forward to learning more about Rugby and eventually being able to look at the game in a whole new way.