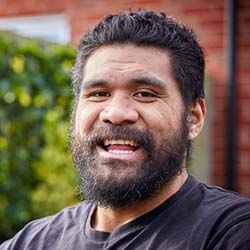 Kiwi-born former rugby league powerhouse Mose Masoe has for the first time really opened up about the severity of the career-ending spinal injury he sustained nearly 14 months ago. The 31-year-old suffered the injury while competing in a preseason friendly, damaging two vertebrae in a seemingly harmless tackle.

Even though Masoe, a former Hull KR and Penrith prop, stunned doctors by taking unaided steps only months after it had been warned he would probably never walk again, he has now revealed having been diagnosed a tetraplegic. This means he has at least partial loss of the use of his torso as well as all four his limbs.

Masoe, who lives with his long-time partner and also now full-time carer, Carissa Masoe, and the couple’s children in the UK, revealed during recent fundraising initiative drive how he’ll never be “normal” again and how instead of having three kids to look after now, she’s got four.

He also revealed how feelings of guilt had been haunting him over no longer being able to provide for his family. Even though he has received contributions and support from the sport’s Rugby League Benevolent Fund ever since the incident, his family remains a small fortune short of what they need to live in reasonable comfort.

Masoe opened up about the severity of his day-to-day struggles for the launch of the Mose Masoe Foundation, a fundraising initiative that aims to help relieve the hardships of players suffering from spinal injuries.