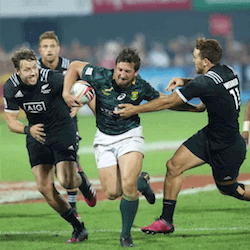 The Blitzboks’ dreams of winning the Sevens Series is no more once again after being smacked out by New Zealand 19-12 in the semi-finals in Cape Town on Saturday.  New Zealand started out by knocking defending Sevens champions England out in the quarter finals by beating the English 14-5, after which they proceeded to beat South Africa, who are considered to be the best Sevens team in the world at the moment.

The Blitzboks scored their maiden try during the first minute and made for a smashing start as their captain, Phillip Snyman, scored their first try after having made it undisturbed down the left flank.  The conversion was not a successful won, but the Boks had a 5-0 lead and that was all that mattered at that stage.

A quick line-out followed shortly after and the Blitzboks realised why it wasn’t a good idea to be found slow on the defence, especially not when playing against the Kiwi’s.  New Zealand’s Tim Mikkelson did what needed to be done and proceeded to score under the posts.

Vilimoni Koroi sweetened the deal by converting the 5 points into 7 points, putting the Blitzboks at a decided disadvantage.

Blitzboks Back In The Lead At Half-Time

Cecil Afrika showed exactly why he was one of the Blitzboks’ star players by scoring from a quick tap penalty and going the distance shortly after in terms of making sure that a conversion was securely in the points bag as well.

By the time that half-time rolled around the Blitzboks held a 12-7 lead over New Zealand.

New Zealand certainly did not shy away from the challenge and retaliated in the way of Koroi moving in on a breakaway opportunity that ultimately led to his scoring deep into the left-hand corner.  The ensuing conversion wasn’t as successful as New Zealand would have hoped, and suddenly the two teams were locked in a 12-12 tie with 5 minutes to go.

South Africa suddenly found themselves on the attack very close to the line and New Zealand’s Joe Webber responded by gunning for a final score which would ultimately prove to be the deciding try.  Suddenly the Blitzboks were down 19-12 with only a minute left to play.

A very last-minute knock on proved to be the final death blow.

Time had ultimately caught up with the Blitzboks, as so often happens to be the case in Sevens rugby.