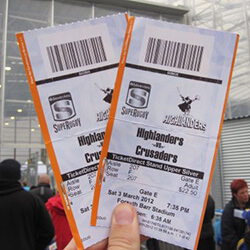 New Zealand Rugby has announced that it has cancelled over 700 tickets for an upcoming Test match that pits the All Blacks against South Africa. The governing body for the sport in New Zealand stated that they had discovered fraudulent tickets in circulation, which are tickets that are being resold on a secondary market.

The match for the event in Wellington is nearly fully sold out, and a spokesman for the sports said that fans that bought the tickets from Viagogo and other sellers ran the risk of not being allowed to enter the venue to watch the game.

New Zealand Rugby has also said that it had been informed by official ticketing agents that their tickets were being purchased through unauthorised channels, and they had decided to ultimately declared them as invalid. Richard Thomas, NZR chief commercial officer, told reporters that it was highly likely that many of these tickets have been sold to unknowing fans on the secondary market. He added that those fans may discover that their ticket are invalid once they present them at the gate of Westpac Stadium.

Leading ticket re-seller Viagogo is currently under investigation by the United Kingdom’s Competition and Markets Authority, which have stated that the site is in breach of consumer protections laws. Earlier, Google also suspended Viagogo as an advertiser, and said they wanted to make sure that user buying from the platform had an experience that they were able to trust.