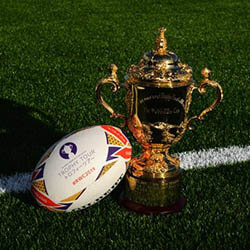 New Zealand launched its World Cup title defence with an exciting 23-13 victory over South Africa that gave plenty of proof as to why the All Blacks are the favourite of many pundits to beat Japan 2019.

South Africa had the best of opening rounds and led 3-0 through a penalty for Handre Pollard as the All Blacks were under sustained pressure. Pollard then lost a comparatively simple penalty before the All Blacks came out ahead of the Springboks to claim control of the first half.

A loose pass from Faf de Klerk provided the All Blacks a chance at a breakaway, and another penalty from Richie Mo’unga allowed them to level the score, while tries from Scott Barrett and George Bridge left South Africa wondering how they had lost control of the game too quickly. The Springboks were able to find their way back into the game after the interval, with Cheslin Kolbe’s strong running beginning to give the All Blacks some trouble, while Pieter-Steph du Toit’s try and a drop goal from Pollard reducing the deficit to 17-13.

South Africa were on top for the second half, but another two penalties from Beauden Barrett and Mo’unga gave the All Blacks the steam they needed to push out ahead of their rivals, and continue their record of never having lost a World Cup Group Match to date. The All Blacks are currently chasing a third World Cup title for Japan, which would make it their third successive victory.