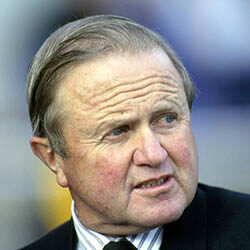 Ex-New Zealand Rugby chairman and all-round rugby legend and advocate for the sport Eddie Tonks has died. Tonks was 85.

A man who will forever be remembered as one of the staunchest fighters and advocates for the sport in its amateur era, Tonks was chairman of New Zealand Rugby between 1990 and 1995. This tenure with the organisation led to his being named lifelong member in 2004. During his term spent serving NZR, the rugby great also chaired the International Rugby Board – now World Rugby.

Tonks’ contribution to world rugby as well as Kiwi rugby cannot be measured, said current New Zealand Rugby chairman Brent Impey following the former rugby boss’s passing. After voted in as a member of the NZRFU Council in 1986, Tonks would go on to play a leading and key role in the putting together of the following year’s Rugby World Cup – the 1987 Rugby World Cup, said Impey, which was of course a rip-roaring success of an event successfully staged.

All of the above would ultimately lead to his involvement in the laying of the very groundwork that would nearly a decade later – in 1996 – see the game go professional.

An immensely respected sports giant in world rugby in every possible circle around the sports world, Tonks leaves behind in life his wife Claire and children Murray and Carolyn. He is also survived by three grandchildren and three great grandchildren.

His absence will without a doubt be felt by many – including his family, his friends, and his many colleagues-turned-friends over the course of his illustrious career.