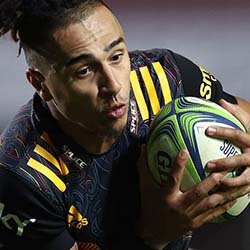 New Zealand Rugby has described the sudden passing of Chiefs and All Blacks player Sean Wainui as a dark day for the game. Wainui died in a car crash early on Monday morning.

According to a statement issued the Bay of Plenty police department, the crash at McLaren Falls had involved a single vehicle only, and with Wainui the only occupant.

The 25-year-old made his star Super Rugby debut in 2016 for the Crusaders before eventually joining the Chiefs two years later in 2018. During his career with the Hamilton club, Wainui made 44 appearances while scoring 90 points. The young centre made sports news headlines earlier this year when he became the first player to score 5 tries in a single Super Rugby match.

According to New Zealand Maori Rugby Board chair Farah Palmer, the young star’s passing has thrown the entire game of rugby into mourning. Palmer said Wainui not only brought a great deal of passion and talent to the game but was also a role-model looked up to by many a young Maori player.

More kind words came from Maori All Blacks, Chiefs and former Bay of Plenty coach Clayton McMillan, who said Wainui had great influence over any team he played for. He described the young star as having possessed mana – not only among his own teammates, but also in the wider Super Rugby community.

Wainui is survived by his wife Paige and the couple’s two children.