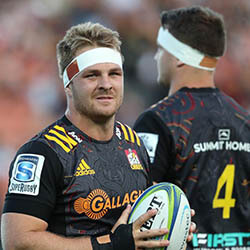 New Zealand Rugby has been suspended for the foreseeable future. The news comes in the wake of the Government’s announcement that the country will go into lockdown on Wednesday the 25th of March and will remain so for four weeks.

All our teams will stop training, but there has, as yet, been no decision regarding the future of the Super Rugby tournament or the All Blacks Tests that have been scheduled for July. Chief Executive Officer of NZR Mark Robinson has stated that their priority is the health and safety of management, players, and the wider community as a whole during this difficult time.

All five of our Rugby franchises have up until just now been working under the assumption that they could organise a domestic competition for the 4th of April. But all plans have been overtaken by the global coronavirus COVID-19 crisis that has seen almost all sports competitions grinding to a halt at both grassroots and professional levels.

The Chiefs, Crusaders, and Highlanders are already self-isolating and the Blues have been told to stay away from their Alexandra Park headquarters in Auckland, so the possibility of a new competition being organised was always negligible. But it’s now been put to rest completely.

The latest containment measures are putting huge monetary pressure on New Zealand franchises and NZR, not to mention Sky Television, but the Government has let it be known that they are going to be extending their Financial Relief package to include incorporated organisations. This will go a long way towards keeping the game afloat.