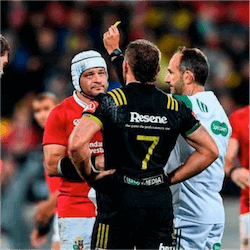 Chris Boyd, coach for the Hurricanes, was dismayed at the thought of match officials not sending Iain Henderson, lock for the Lions, to the sin bin for his tip tackle on Jordie Barrett in last night’s game. He said that it possibly even deserved more than a yellow card, maybe less than a red. This is a rare take on the incident, but is one which Brian O’Driscoll supports.

Serious Injury Could Have Resulted

The former captain for the Lions, O’Driscoll was tipped on his shoulder during a ruck cleanout in the 1st test match against the All Blacks 12 years ago, by Keven Mealamu and Tana Umaga. His incident caused him serious injury, wrecking his tour, and putting him out of the game for 6 months.

Henderson Almost Got Away with It

Henderson, who had been playing well until the incident occurred in the game’s 66th minute, looked at one point likely to escape with just a penalty for his team. Luckily the TV match official managed to convince Romain Poite, the ref, to have another look.

The Hurricanes Were Inspired

The incident and the advantage which the Hurricanes received as a result seemed to galvanise the team, who went on to score 2 tries, and almost stole the match at halftime.

Boyd spoke of his shock when listening to the mic because they hadn’t seemed to notice the incident, stating that it was very clear that Henderson had tipped well above the horizontal. He went on to say that the yellow card was a good start, although he felt it should have been an orange, but that between a yellow and a red was acceptable.

When Murray Kinsella, the Irish journalist, tweeted the statement made by Boyd, O’Driscoll, former Ireland International, agreed with him, saying that he felt that the comment was a fair one.

When Boyd’s statement was tweeted by Irish journalist Murray Kinsella, who was present at the game, former Ireland international O’Driscoll responded by saying: “I think that’s a fair comment.”

Thanks to Barrett not being injured, and the appropriate sanction being applied, this incident will likely not see the same mileage that the one which O’Driscoll was involved in did.

The form of Barrett, rather, who began the match at the fullback position, and started to shine when he was moved up to the 1st 5 in the game’s 2nd half, should rightly be of more consequence.