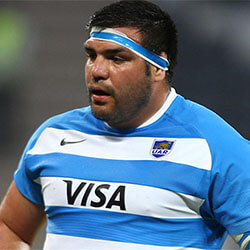 Argentina have decided to pick Stade Francais prop Ramiro Harrera for their Rugby Championship Test against New Zealand that is set to take place in Buenos Aires, in a move that shows their relaxing of a local-only policy.

Harrera will be replacing Santiago Medrano, now a substitute, for the Estadio Jose Amalfitani match with the Pumas hoping to claim victory over the All Blacks after 27 previous failed attempts. The locals-only rule has been eased this season with two other props, Gasteon Cortes of the Leicester Tigers, and Juan Figallo of the Saracens.

Figallo began both Tests against South Africa earlier in August, and Cortes was pulled off the bench in a 46-24 defeat by the All Blacks during their showdown in Nelson earlier in September. So far, the Pumas have yet to pick any European-based players since the 2015 Rugby World Cup in an attempt to pull in more local players for the Buenos Aires Jaguares in Super Rugby.

Officials have long feared that there may be an exodus of players to English and French clubs, and that domestic rugby in the country would be weakened, directly affecting the Jaguares ability to play rugby on an international level. The second change in the team sees Bautista Ezcurra being placed in the backline at inside centre, taking over the role for winger Ramiro Moyano for their away game that saw the team beat Australia 23-19, showing a gradual improvement of the Pumas all-around.