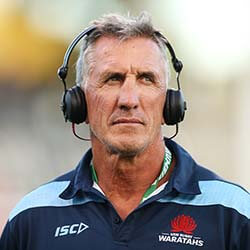 After 18 months of coaching the Waratahs, Rob Penney has been shown the door. This comes after the team experienced five consecutive loses in the beginning of the year. This dire record has been a shocker for fans and bettors alike, and now the team has taken action.

However, Penney firmly believes that budget cuts and an inexperienced team gave him little to no chance in being successful. He had asked NSW Rugby to address these issues previously and believes that a major shake-up is the only way to make a change.

He has also said that this situation was brought on as a result of decisions made by people in positions of governance that have had horrific results. One of these being a $1 million budget cut for the 2021 season, forcing highly rated players to leave.

This budget cut could have detrimental long team effects as the team needs to recruit new players with a budget significantly lower than their competition. They are no longer able to recruit foreign players like other states, making it difficult to build a strong team.

The reason for this cut was to keep the Waratahs solvent, however, none of the other states have ad to deal with budget cuts to remain solvent, something that Penney is still questioning.

While Penney has been fired, he believes that he had done the best that he could with the resources available. However, players and fans may well argue that this isn’t the case, and him being show the door is a step in the right direction.