Robbie Deans to Coach the Barbarians 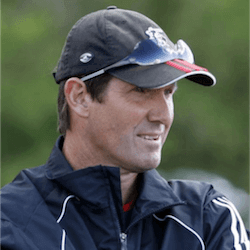 Robbie Deans to Coach the Barbarians vs. New Zealand at Twickenham

Robbie Deans is going to be coaching the Barbarians for their milestone meet-up with New Zealand at the Twickenham Stadium next season.

He is currently heading up the Japanese Top League champions Panasonic, and has previously led the Australian team from 2008 through to 2013. He is the single most successful coach in the history of Super Rugby, thanks to his 5-title win with the Crusaders.

Dean will be taking leadership of the side for the Killik Cup match set to take place on the 4th of November, and this will be the 4th time he has done so. He was previously in charge of the renowned invitation team as recently as 2016, when they went on to draw in a match at Wembley against the South Africans, with a final score of 31-all.

The Anniversary of the NZ Rugby Union Foundation

The match against New Zealand will be celebrating the 125th anniversary of the establishment of the New Zealand Rugby Union, and will no doubt stir up memories of the various meetings between these 2 mighty teams.

Gareth Edwards and his famous try were the stars of the 1973 encounter: this event is widely held to be one of the best matches in the history of the sport. The Barbarians went on to beat the All Blacks once again in 2009, thanks to South African Bryan Habana’s hat-trick of tries.

Deans Comments on the Landmark 1973 Fixture

Deans has been quoted as saying that the milestone fixture of 1973 set very high standards for how the game should be played in both players’ and spectators’ minds, and that the rivalry between these 2 teams stemmed directly from that game. He went on to state that the Barbarians were pushed into another level entirely thanks to that game, and that interest in the team, and the mystique surrounding them, were the results of that magnificent match.

Deans’ and the Barbarians’ Unique Approach

Deans said that the Barbarians were an unusual team because of their innovative approach to the game, and elaborated by saying that they typified all of the elements of rugby that are held so dearly. He mentioned the camaraderie, the fact that different cultures were interacting, and how these games celebrated differences as well as their common love of rugby.