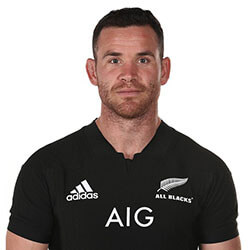 Current world champions the All Blacks have made only one injury-enforced change to their squad as they gear up to take on Ireland in a once-off Test match being played in Dublin.

Centre Ryan Crotty will be taking the place of Sonny Bill Williams, who received a shoulder injury during their 16-15 victory against England, which has opened a space for Anton Lienert-Brown on the bench.

Coach Steve Hansen has told reporters that he believes the winner of the upcoming match would determine which team was the best in the world. He explains that it will be match of number one versus number two, and that the excitement has been building as they get closer to the match.

Hansen has been persistent in fielding two playermakers against their top sides, with Damien McKenzie as fullback and Beauden Barrett as flyhalf. He has also admitted that the current squad line-up is similar to the line-up that he might be using for their attempt at a third-win at a Rugby World Cup during their time in Japan next year. This, however, excludes the recent injury-enforced absences of prop Joe Moody and Sonny Bill Williams.

Aaron Smith will be playing his 82nd Test, and will become the most capped All Black halfback of all time, overtaking previous record-holder Justin Marshall. Samuel Whitelock and Brodie Retallick will set their own records for an All Blacks’ lock partnership, which will start with their 50th Test together.