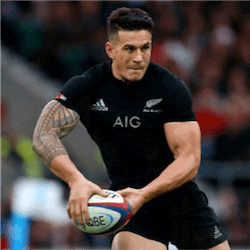 The All Blacks have hailed the decision around Sonny Bill Williams being allowed to play the first Bledisloe Cup test, as being common sense that has prevailed.  World Rugby was taken slightly more aback by the decision.  Williams was suspended from play for four weeks after his having shoulder charged Lions’ Anthony Watson.

Williams had seemed truly remorseful after the fact, stating publically that he had let this brothers down.  He had also apologised profusely to Anthony Watson himself.

The ruling – as initially imposed on Williams – meant that he would have had to give the Bledisloe Cup test a miss, as he would only have been cleared for play again after August 19.  However, Williams lodged an appeal with the independent appeal committee – made up of Chairman Graeme Mew (Canada), Shao Ing Wang (Singapore) and Stefan Terblanche (South Africa) – and was successful.

The decision by the panel has attracted mixed reactions.

World Rugby has issued an official statement, placing on record that the decision was to them, surprising.  Most prominently as a result of the fact that they found the panel’s interpretation of the word “match” to be unexpected and just a tad baffling.  Despite having indicated that they would not be opposing the outcome of the appeal process, they did state that the regulation governing the definition of what constitutes a “match”, would be referred to the Regulations Committee for discussion in September, in order to establish a universal rule for going forward.

The entire premise for the outcome of the panel’s decision was, after all, based on the fact that the All Blacks’ game in Pukekohe did not constitute a match.

World Rugby saw the irony in the outcome as far as the regulation goes – defining a match as two teams going head to head in competitive sports. Agustin Pichot, vice chairman of the organisation, went a little further by saying that he strongly disagreed with the decision by the panel.

Sports writer Gregor Paul agrees, saying that this kind of outcome would commonly be referred to as “jumping the shark”.  He goes on to define “jumping the shark” as that moment when all credibility is lost as a result of a plot becoming completely far-fetched; to such an extent that all interest in the plot and after-effects is lost.

He lashed out at the panel, saying that it would seem as if world Rugby was now being treated as if it were but a private club.

We have a feeling that many would agree.