Scotland To Face All Blacks At Murrayfield 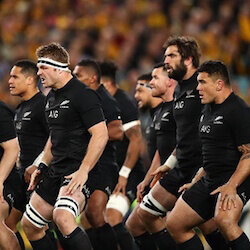 All Blacks Take on Scotland

Ben Toolis is a man with an opinion.  A controversial opinion that is.  With Scotland having never beaten the All Blacks in the entire history of the two sides coming together, Toolis’ opinion that Scotland will be able to find the weak spot in the armour of the All Blacks when they visit Murrayfield on Saturday, seems rather out of sorts.  Especially considering that All Blacks have lost only 3 of their 27 matches since winning the World Cup in 2015.

Yet, Australian-born lock Toolis is sticking to his guns, saying that there is always something to exploit and that you just have to look hard enough.  Referring to the Ireland having beaten the All Blacks for the very first time last year, Toolis went on to say that there is always an area of the game where you can do damage.  Irrespective of who you are up against.

The game plan is obviously to rack up points fast and hard and put the All Blacks under pressure in the hope that this will be enough the weaken the seemingly invincible resolve.

On the other side of Toolis’ confidence there is a Scottish skipper who disagrees.  Scotland’s captain John Barclay has said that its nothing short of comical to suggest that the All Blacks are vulnerable in any way ahead of Saturday’s match.  Barclay should know, having made his debut against the All Blacks back in 2007.  Referring specifically to New Zealand’s dominance despite a string of highly significant retirements, Barclay said that it was just the way that it was for New Zealand, forever triumphing despite their circumstances.

Barclay went on to say that the figures spoke for themselves and that New Zealand had a winning recipe when it came to produce stellar teams year in and year out.

When questioned about Scotland’s failure to have beaten the All Blacks in the entire history of significant international rugby, Barclay responded by saying that he had anticipated the question to come up at some point but that it didn’t feature as a factor for him.  He said that it was a huge and exhilarating challenge to try and beat the odds and have a chance to change the trajectory that history has dictated, especially at a venue like Murrayfield.

The Scottish side kicked off their European tour with a 44-38 victory over Samoa and New Zealand launched theirs by beating France 38-18.