Scott Robertson Has His Sights On Lions Tour 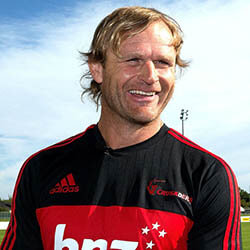 Crusaders coach Scott Robertson is clearly very interested in becoming involved in next year’s British & Irish Lions tour of South Africa. So much so that he’s been completely outspoken about the fact that he has made contact with Lions head coach Warren Gatland in order to state his interest in and availability to the accomplished team.

He revealed during a recent radio interview that the decision to reach out to Gatland had naturally followed on his missing-out on an All Blacks coaching job. His reasoning, said Robertson, went along the lines of his having to go in search of the second biggest thing next to coaching New Zealand’s national team. This, for the Crusaders coach, meant joining next year’s Lions tour.

But despite his keen interest and tentative excitement, Robertson said he realises that he would have to work via his own line of management if the conversation with Gatland did happen to graduate all the way to decision-time. Also, Robertson acknowledged that any oversees offer would have to be timed with extreme care, especially given present-day challenges. In the meantime however, Robertson said he’s happy as a clam to stay with the Crusaders.

Warren Gatland isn’t the first New Zealander to head-coach the Lions franchise. His Kiwi predecessor is none other than Sir Graham Henry, who held down the prestigious coaching job for the duration of the team’s 2001 tour of Australia. This was before Henry was afforded the opportunity to coach the All Blacks.