Springboks Say They Will Tour To Play Lions 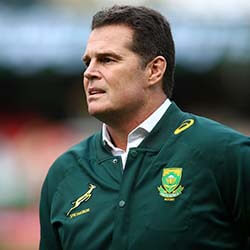 Springboks director of rugby Rassie Erasmus has expressed a willingness to see the Springboks’ upcoming series against the British and Irish Lions being played away. Erasmus said on Monday that playing away was preferred over cancellation of the series, and that the Springboks would go all the way to “option Z” if that meant saving the three-test series.

Erasmus did however emphasise that the decision regarding whether the series proceeds as planned on South African soil, or elsewhere, or not at all, would be that of South African rugby’s senior leadership and Lions management.

The Springboks boss’ recent comments on the 2021 Lions tour were the first official indication of South Africa’s willingness to tour and travel instead of the Lions. The current expectation is that the tests may be played in Dublin, London, and Cardiff instead of Cape Town and Johannesburg.

Due to the fact that South Africa has not yet started to roll out vaccinations, fans will not be permitted into any of the stadiums earmarked for the hosting of the tour. This makes the hosting of the tour unviable from a financial point of view. South Africa is furthermore currently in the grip of a second wave of infections, and one regarded much worse than the first.

South Africa is however hoping on a profitable Lions series, which, if hosted with fans present at stadiums, could pull the organisation out of intense financial trouble created by the global health crisis. The Springboks have not been able to play even a single test since winning the 2019 World Cup in Japan.