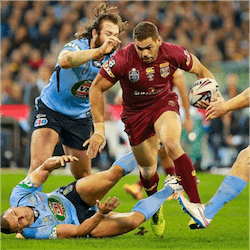 Fullback Billy Slater was responsible for waves of shock and scare rolling through camp Maroons after being the unfortunate victim of a painful ankle injury on Sunday.  The 28-Origin veteran is one of the key players in the series decider, taking place at the Suncorp Stadium on Wednesday – leaving only two days for either recovery or a difficult replacement decision.

Captain Cameron Smith seemed confident that Slater was expected to recover in time for Game 3.  Slater seemed to be in great deal of pain at the time of having been driven off for treatment, and as a result will probably be sitting out on final preparation training on Tuesday, in an attempt to allow enough down-time for the injury to heal.

Maroons have yet to make any decisions regarding a re-shuffle for in the event that Slater does not recover in time to play.

Despite injuries threatening to rock the Queensland boat, the Maroons remain the favourites to walk away victorious from the series decider.  The fact that, in the likely event that they do win, this will have been their 12th series win in the past 13 years, has a lot do with the expectation of yet another win during this year’s Game 3.

Jonathan Thurston and Darius Boyd will be sitting out on the series decider, also as a result of injuries.  This has necessitated a number of changes – most notably the inclusion of Cameron Munster and Ben Hunt, who will be making their Origins debut during what is considered to be one of the most explosive series deciders yet.

Meanwhile in camp Blues, in the event that yet another defeat is on the cards on Wednesday it will more than likely mean the end of coach Laurie Daley.  Daley is the longest serving coach up to date – and the one in the driving seat since 2006, the year that the panic started for team Blues.

Whether the Blues have analysed the reasons for their Game 2 defeat is anyone’s guess, but this would have been a crucial move if they were to have any hope of winning Game 3.  Despite not being Game 3 match favourites, the Blues have shown unprecedented tenacity by beating the Maroons on home field during Game 1.

Wednesday night is bound to be a game-changer in more than just a couple of ways.