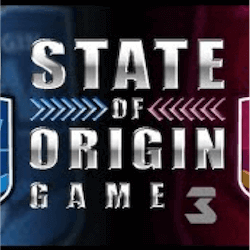 History To Repeat Itself in State Of Origin Game 3

It is starting to look like New South Wales won’t be the only side to repeat history during the 2017 State of Origin Game 3.  In a very déjàvu-like move, Queensland too, seems hell-bent on partying like its Nineteen-Ninety-Six.

It’s very likely that the exact same seventeen players will be used by the Blues in all three games of the 2017 series – a trick last utilised in 1996.

It certainly worked out all right for New South Wales the previous time around – after all, the Blues reigned victorious in the Origin series of 1996.  By default, the same cannot be said for the Queensland Maroons.  Their combination of unlikely trio Jason Smith, Julian O’Neill and Sale Shearer wasn’t as roaring a success as they had initially hoped.  Now, they seem intent on repeating what some deem to be old mistakes – this time round in the shape of Anthony Milford, Johnathan Thurston and Michael Morgan.

Daly Cherry-Evans has been omitted from the Maroons squad for Game 3, a move that has set the tongues a-waggin’ – to say the least.  Ben Ikin, former Maroons super-star, has made no secret of his being in strong disagreement with the exclusion of Cherry-Evans, saying that the player deserves to be on the team for Game 3 – instead of replacement choice Ben Hunt.

Queensland coach Kevin Walters defended the inclusion of Hunt, revealing that the reason behind the selection was that Ben Hunt is a runner – and running the ball is what will be required of him during Game 3.

Hunt, a Broncos Halfback, has had a tumultuous month – having been downgraded to reserve player status with the Ipswich Jets, before being selected for inclusion by Walters.  Hunt seems truly unfretted by the drama of the previous month, saying that he feels ready for the task at hand and stating confidently that he knows how to play Football.

Selector Darren Lockyer announced that he was in full agreement with the choice made by Walters to include Hunt in the series decider, believing Hunt to be right for the Queensland mix.

Game 3 will reveal whether this will be yet another Allan Langer.

Walters seemed adamant that bringing Hunt into the camp was a well-considered decision, and that Hunt was in his opinion, an Origin-quality player.

All will be revealed on July 12.