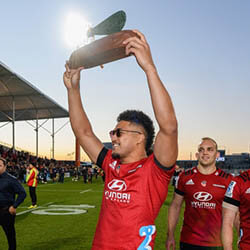 Crusaders CEO Colin Mansbridge has admitted to the Super Rugby Aotearoa trophy having sustained damage whilst in the possession of the team. Mansbridge, after having initially tried to rebuff claims of “minor damage” having occurred during Sunday’s post-game victory celebrations, eventually on Monday admitted to the entire suspected palaver.

Confirming the damage by means of a statement made to enquiring members of the sports media, Mansbridge pointed out that the very purpose of trophy such as the Investec Super Rugby Aotearoa trophy was that it should be passed around. The trophy had in fact been dropped, reneged the CEO on his earlier refusal to admit that anything awry had been at play, and New Zealand Rugby notified about the damage and prompted to provide cultural advice.

A photo of the trophy released late on Monday afternoon clearly shows only minor damage having occurred to the bottom-part, or base, of the beloved Super Rugby trophy, with the famous pounamu still firmly attached. But a separate photo showing the base without the pounamu has apparently since been leaked to a prominent online sports broadcaster. This after a tip-off to the same effect was received earlier on Monday.

The earlier supposedly true photo also shows several chips and dents to be present – all to the base of the pounamu-missing trophy. The provider of the photo showing the actual state of affairs also confirmed that a message asking all members of the franchise to look for the missing pounamu had been doing the rounds since late Sunday evening.

The pounamu has according to the same source since been found and returned.