The Current All Blacks Player Ratings 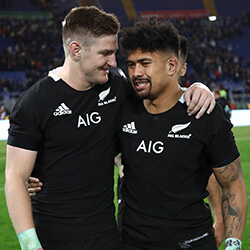 The ratings for players in the All Blacks team have been announced. Ratings are gathered for players after every test, with hooker Codie Taylor with the best ratings on average of any All Black who made the field in four or more tests. Sonny Bill Williams was at the other end of the spectrum, having the lowest rankings in total.

Taylor, who played 12 tests this year, had an average ranking of 7.8 out of 10, with the highest ranking he received being 8, and the lowest being 6. Lock Brodie Retallick wasn’t too far behind Taylor, and scored an average ranking of 7.5, which was brought down by a score of five off the bench during their time against the Wallabies in their Yokohama match.

Three All Blacks players managed to score perfect 10 in test matches this season. George Bridge, who claimed two tries off the bench against Japan, Brodie Retallick against England, and prop Karl Tu’inukuafe during their Buenos Aires test.

Damien McKenzie’s score of 7.2 followed Vaea Fifita’s 7.33, with Ardie Savea coming in third with 7.2, while Beauden Barrett took 7.1, rounding off the top five. It was close between the Barrett brothers, with Scott and Jordie both averaging scores of seven, which was just behind Beauden. Sonny Bill Williams scored the very lowest in All Blacks, with an average rating of just 5.3 across five different tests, including an extremely low score of 3 that he earned while playing against South Africa.