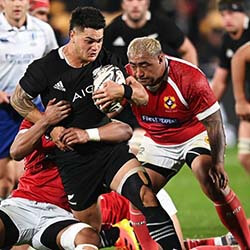 Following the landslide victory in this weekend’s game between the All-Blacks and Tonga, it has received a lot of criticism and even been labelled a pointless exercise.

The Tonga team had to compete without 20 frontline players as a result of politics, COVID-19, and rugby economics. As a result, they had to find new players which inevitably led to this weekend’s shocking results.

Veteran halfback Aaron Smith has stated that the match was not in vain and delivered a lot of value for both teams. He sat out the game and watched as Brad Weber scored three tries while Finlay Christie finally made his playing debut.

He believes that it was an opportunity for players to earn their first test cap and take on the first game this year. It was an opportunity for the team to come together, connect with Tongan players and play at a new stadium. While the experience has been special, it has since been revealed that some Tongan players had had to pay for quarantine at their own expense although this is yet to be confirmed.

Damian McKenzie added to Smith’s notion saying that he also believes that this weekend’s game was a great start to the season and definitely delivered value to the players. The team was able to see what works, what does not and train for the upcoming game accordingly.

The All-Blacks are set to play against Fiji at Forsyth Barr Stadium this weekend and will be using the game against Tonga to shape their training programme.