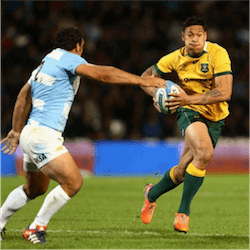 Australia have not been able to beat South Africa in South Africa since 2011, and to the frustration of Wallabies fans, they kept that record intact in Bloemfontein on Saturday. Their 27-27 draw against the Springboks left Australia on 10 points in the 2017 Rugby Championship, and the South Africans on 13.

Which meant that at that point, with New Zealand still on 19 points ahead of their clash with Argentina in Buenos Aires, the All Blacks became 2017 Rugby Champions, as they couldn’t be overhauled on the ladder. They went on to beat the Pumas 36-10 anyhow, in an uneven performance that nevertheless secured them five points and a shot at completing the Championship with a clean sweep against the Springboks in Cape Town this Saturday.

The Boks are going to have to pull a rabbit of miraculous proportions out of the hat to win that one, but in the unlikely event that they can scoop even a losing bonus point or two against the All Blacks, Kiwi sports betting fans will want their team to take a five-pointer in their final match against the Pumas in Mendoza this week. The Wallabies could still finish the 2017 tournament in second place: which, in any rugby union competition involving New Zealand, counts for a lot.

Backing Australia to score four tries playing away this Saturday isn’t a huge stretch, according to the betting sites. The Wallabies are being offered at $0.45 and below to win, although the Pumas at $2.10 are being rated better than the Springboks are against the All Blacks.

However, given Australia’s struggle for territory against the Boks in Bloemfontein, after Israel Folau’s 10th-minute try had started off the seesawing match in thrilling style, they may have a harder time against Argentina than many bookies suspect. With one of the best chances a Wallabies team has had to create an upset in South Africa in recent years, they couldn’t close the deal.

In fact, two-try hero Marika Koroibete almost gave the Springboks the win by not releasing in the dying minutes, and Aussie fans breathed a sigh of relief when Elton Jantjies pulled the penalty wide of the posts to leave the scores tied. To pick up the points they need against the Pumas this Saturday, the Wallabies will have to up their penetration and watch their discipline.