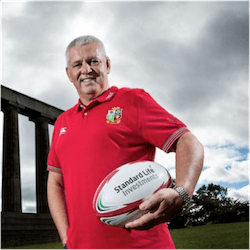 New Zealander and British & Irish Lions coach Warren Gatland has announced that he will he will no longer be available to continue taking charge of the helm in 2021.  Gatland led the Lions to a stellar victory in Australia in 2013 and more recently to a draw in New Zealand.  Gatland has also withdrawn from the next tour to South Africa, likening the putting together of a winning team to the re-invention of the wheel.

The Madness Behind The Mayhem

Gatland has let slip that he had been hurt by the negativity and criticism towards him from his own camp of players, most prominently from the Irish flanker, Sean O’Brien.  The Lions’ recent 10 match tour to New Zealand was mired by the underlying theme of unhappiness with Gatland, despite having ended in a credible draw – a magical feat it its own right considering that the Lions had but won a single match in New Zealand in the last century.

The New Zealand Herald’s comic depiction of Gatland as a clown with a large red nose certainly did not help the cause.  Gatland responded by saying that he had hated every minute of the New Zealand tour, especially the press.  He did however appreciate the unusual success for what it was, saying that it had been hard work but at least it paid off to some extent.

When People Are The Problem

Gatland had earlier on suggested that he would be prepared to take on the Lions for a third term come 2021 but has since backed up on the statement, saying on Monday that what he had learnt from his time with the Lions was the difficulty of bringing together players and staff whilst faced with limited preparation time.

Gatland did however say that he believed in the magic of the Lions and that his hope was that senior role players and staff would continue to recognize this and work towards giving coaches more time to prepare the squad, as this had been his main vice.

Remarks to the tune of the Lions being able to go for the win had it not been due to poor coaching made for the final straw for Gatland.  These were the words of Sean O’Brien.  Despite the obvious bitterness as a result of O’Brien’s remarks, Gatland remarked that it was only fair to acknowledge that O’Brien had had an excellent tour and that there was no doubt regarding his contributions to the squad.