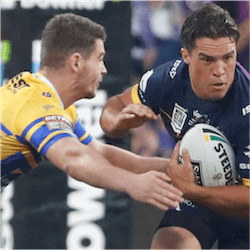 It’s not easy business learning a hard lesson. Just ask Leeds in the dire aftermath of their 38-4 World Cup Challenge defeat against Melbourne. Leeds had not gone down for  lack of trying, having managed to hold their own for the longest time before ultimately succumbing to the 34 point slam to their ego’s.

In Leeds’ defence, they did make their way to Australia without a couple of their frontline forwards, which ultimately proved a significant factor in how the game panned out. Up until midway through the first half of the game, it was a question of everything hanging in the balance. The close of the opening quarter saw them losing Jack Walker and Stevie ward to injuries, which also signalled the beginning of the end.

Melbourne Fresh Into The New Season

For Melbourne, it was Suliasi Vunivalu’s try at half time that proved pivotal. This, coupled with a two-fer duo of tries from Cameron Smith, set the wheels in motion in favour of the Australian side. Worst of all for Leeds is that they had had their chances to turn things around, but forfeited each one.

Leeds has now lost out on what would have been a record equalling fourth World Cup victory. Melbourne are now officially in the ranks of Wigan on the four World Cup Challenge wins, tarnished only by the fact that their 2010 achievement had been expunged as a result of their failure to comply with salary cup regulations.

Leeds have already played twice in the Super League championships for the current season. Melbourne, however, will only be setting out on their journey on March 10th. That’s not to say that the sterling hosts were rusty or off to a slow start. After the initial score by winger Hall, it was all systems go on a thrifty downhill slope and there was simply no stopping Melbourne after they had gained momentum.

Five of the past six World Club Challenge matches are now safely tucked into the back-packs of Australian teams.

Leeds head coach Brian McDermott said after the match that it would most probably take a couple more games of the same intensity before his squad would be adequately prepped to withstand the likes of Melbourne. He said that it was always a challenge to try and stick it to a club like Melbourne and that trying something new was often the only way to try and come out on top.