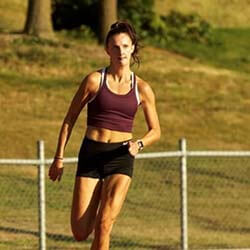 It could be said that champion 400m Kiwi runner Camryn Smart was born and bred for Olympic greatness. The daughter of 1996 Olympic 800m finalist Toni Hodgkinson and champion national decathlete and 400m hurdler Alistair Smart, the 19-year-old has all the support in the world to make it to the very top of her discipline.

Smart started showing promising results already towards the end of her high school career, and during her final year, under the watchful eyes and guidance of coach Tony Aitkenhead, she eventually went on to win the national senior girls 400m event – and in a time only a second off her Olympic mum’s 1989 record of 54.92s. Hodgkinson was that year competing for her own high school alma mater, Golden Bay High School.

But though stopping short of breaking her famous mother’s record by a second, Smart still made it all the way into the prestigious national schools athletics record books by teaming up with best friend Izzy Neal, Holly Young, and Joelle Post to not only win the 4x400m relay, but also smash the event’s longstanding national schools record.

And it’s inspired her to now chase down the national senior women’s 400m record – along with mum Toni’s personal best of 53.45s.

As for her immediate goal right now, Smart is training hard to qualify for the World University Games in China this year. And she says she’s pinning her hopes on the possibility of the inclusion of a 4x400m relay team in China too, as this would allow her to potentially compete alongside fellow relay runner, flatmate, and best friend, Izzy Neal.