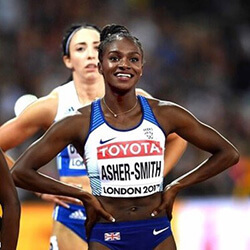 Dina Asher-Smith has become the first British woman to win a major global sprint tile after she claimed victory at the 200m World Championships. The 23 year old, who also took silver for the 100m, was the favourite of the event, and took the field to give her home country the record of 21.88 seconds. Talking about her win, she stated that she was lost for words after the race, and that she doesn’t think it has properly sunk in yet. She was followed by Brittany Brown, who took silver with a time of 22.22 seconds, while Swedish Mujinga Kambundji came in third with a time of 22.51 seconds.

Asher-Smith also now holds the record for the first British athlete to win a world or Olympic spring title since Linford Christie in 1993 at Stuttgart. There had been no light show for the finals in Doha, but the athlete was instead greeted with a massive cheer as she smiled and made her way to the starting blocks. Asher-Smith came off of the bend in front of her fellow runners before she pulled away from the rest of the athletes for the last 60m.

It has proven to be a brilliant six year period fort the athlete, who won the European youth 200m title in 2013 and is now a senior world champion. She remains the country’s sole medallist in Doha with a total of two, although that may be extended with the upcoming 4×100m relay.