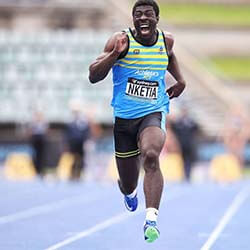 Kiwi sprinter Eddie Osei-Nketia has been looking into changing his career in rugby. Reports have been doing the rounds and in response to this, Canterbury coach Mark Brown has stepped in to offer the player some much-needed advice.

After playing at Scots College in Wellington, Kiwi sprinter Osei-Nketia was not nominated to participate in the Tokyo Olympic Games, a decision made by the New Zealand Olympic Committee. He is now looking at playing for the Crusaders. While Brown does not know Osei-Nketia from a bar of soap, he has mentioned that if he is really considering making the change and becoming a rugby player, he needs to be fully committed to doing so.

Osei-Nketia has voiced his disappointment after being snubbed from the Games, as he qualified in accordance with the international ranking system. Fellow sprinter Zoe Hobbs was also eligible but was also not nominated to compete.

The career switch is something that Osei-Nketia has given a lot of thought to. He says it will be an honour to play for one of the Super Rugby’s best teams. He knows that he needs to first get there and work hard before he can make it to the top but knows that if he puts his mind to it, he will be able to get there. He believes the Crusaders academy could turn him into a talented rugby player.

While the circumstances of the switch may not be ideal, it could very well be a recipe for success should Osei-Nketia decided to pursue a different career.