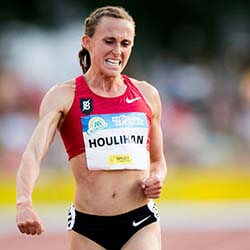 US pro-athlete Shelby Houlihan will not get to blame a failed drug test on a contaminated pork burrito, the Court of Arbitration for Sport (CAS) has ruled.

Houlihan failed a drug test in June, after which she was banned from competing in professional sports for four years. The pro-athlete went on to claim that she had ingested a banned substance, namely nandrolone, by eating a contaminated burrito purchased from a Mexican food truck.

CAS however this week ruled against Houlihan, with a detailed 44-page verdict describing the probability of Houlihan’s version of events being a possibility as being close to zero. The sporting watchdog quoted several experts in its ruling – all of whom agreed on the high improbability of the elevated of androgen levels referred to by Houlihan being present in a pork burrito.

Houlihan did at the time of the initial finding have a long line of character witnesses testifying in her favour. According to the US star, who finished fourth in the 1500m at the Doha world athletics championships in 2019, she had depleted every possible avenue for proving her innocence. According to the star, this included the passing of a polygraph test as well as having her hair sampled by a world-class toxicologist.

According to the arbitration court, however, neither a hair-based toxicology report nor a polygraph test meets the high standards of proof required for the effective rebuttal of a guilty finding in terms of doping. The assumption is therefore that the violation had indeed been intentional, explained CAS.