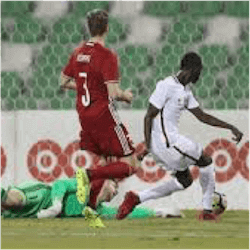 The 2017 Gulf Cup Of Nations will be the 23rd instalment of the popular event, also referred to as the 23rd Arabian Gulf Cup.  The competition kicks off on December 22nd and will run through until January 5th, with the first game played between Kuwait and Saudi Arabia.

The competition isn’t officially recognised by FIFA, and the official list of fixtures for this year’s instalment of the competition was only released days before kick-off.

Round 2 will see one of the main matches of the competition playing out, with Saudi Arabia and UAE going head to head.  Kuwait and Oman face it off shortly after.    The second week also sees Yemen playing Bahrain and Iraq going up against Qatar.  In the final round of the second group stage, Bahrain and Qatar are scheduled to kick off at the same time as the match between Yemen and Iraq.

The final is scheduled to be played on January 5th at the Jaber International Stadium and the match kicks off at 8 p.m. local time.

Saudi Arabia have announced a surprisingly youthful squad to play in the 2017 Gulf Cup of Nations.  The team includes only five players from the last squad list, with the emphasis on fresh young blood being incorporated.

In another surprise move, Croatian coach Krunoslav Jurcic has been selected to guide the squad through the competition and not recently appointed team coach Juan Antonio Pizzi.  Team spokesman Mohamed Al-Shaikh has said that it was a misconception that Saudi Arabia were not taking the competition seriously by sending such a youthful team to represent the country at the tournament.  He said that instead, the decision was in line with a new strategy and arrangement made with incoming coach Juan Antonio Pizzi.

Six young players who have been included in the squad and include Hamman Al-Ajaj, Ali Al-Nimr, Ali Yahya, and Ahmed Ashraf.  The six youths all reside in Saudi Arabia but have all been born to foreign parents, yet another unconventional move.

Regular players midfielder Mukhtar Ali and midfielder Faris Abdi have both been excluded from the squad due to circumstance and since the competition takes place outside of the official FIFA calendar.