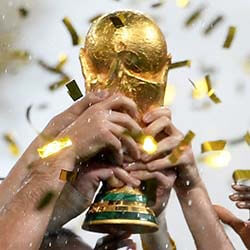 International Olympic Committee president Thomas Bach on Thursday labeled FIFA’s plan for staging a biennial World Cup a “threat” not only to soccer, but also to other sports.

Bach also lamented FIFA boss Gianni Infantino’s absence in Beijing, saying the IOC would have liked to discuss the matter while at the Winter Games. Bach during Thursday’s traditional pre-Olympic meeting said Infantino had mere days before the Games cancelled his visit to Beijing unexpectedly.

Infantino has been pushing hard for a new schedule that would see World Cups for both men and women staged every two years, instead of the current four. According to the FIFA boss, such a move will close the gaps on European clubs typically dominating competitions, as well as generate billions of additional dollars in revenue income.

While Africa has been voicing strong support for Infantino’s plan, European and South American soccer federations have said they will not support such a change. According to Mustapha Berraf, who is the president of the African group of national Olympic committees, a World Cup every two years would have a disastrous effect on the continent.

Weighing in also had been Olympic table tennis gold medalist Seung Min Ryu, and IOC executive board member Nenad Lalovic. Both agreed that adding additional World Cups into the mix would only add to players’ already tight workloads, thereby putting their health at risk.

Infantino faced enormous criticism during an online meeting hosted by the IOC and Bach in December.