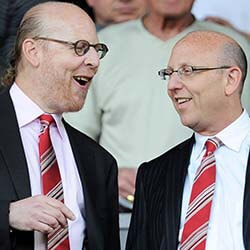 It has now been confirmed that the Glazer family, who owns both Manchester United as well as the Tampa Bay Buccaneers, have not been successful in their attempt to obtain the rights to one of the two new IPL franchises set to join the roster next year.

Entering the highest bid for the Lucknow franchise had been the RP-Sanjiv Goenka Group. This group previously owned the now-obsolete Pune franchise.

The second of the two new additions, being the Ahmedabad team, was offloaded to CVC Capital Partners. The private equity giant already owns hares in Spain’s La Liga, as well as in rugby’s Six Nations tournament.

The successful buyers forked out a combined £1.2 billion for the two franchises.

The addition of two new teams to the IPL roster will mean that from next year, a total of 10 teams will play 74 matches – with each franchise playing seven games at home and seven games away.

Commenting on the successful bidding process finalised earlier this week, BCCI President Sourav Ganguly said the enormous interest in the Indian Premier League, and even also from outside of India, has been exceptionally heartening. He said it once again drives home the financial strength and allure of the tournament.

He also said the IPL is emerging as a top instrument for turning cricket into a truly global sport, and that he personally is very much looking forward to next year’s edition of the cash-richest competition on the planet.