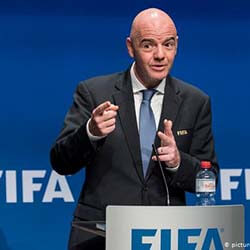 FIFA president Gianni Infantino has indicated a willingness to abandon the controversial plan of staging a men’s soccer World Cup every two years.

Infantino, during a recent address before the FIFA council in Zurich, said he would call together a summit on December 20, to which all international confederates would be invited for discussing possible plans for reforming the current football calendar. While he stopped short of committing himself to a vote on any specific matter, he did add that any changes would only be signed into force in the event that such changes benefited everybody involved.

Infantino isn’t ignorant about the strong and diverse reactions incited by the suggestion of a biennial World Cup. He did however add that while he’s heard many critical responses, there has also been quite a bit of enthusiasm around the idea. He also said that as what would have been anticipated, the reaction has been different in different parts of the world.

Infantino said his idea right from the beginning has been one of changing only those things “completely” right for absolutely everybody. He said if indeed there were such a concept, he could not envision why everybody wouldn’t be on board.

A prospect of a biennial World Cup only became public news earlier this year when FIFA received a request from the Saudi Arabian Football Association to conduct a viability study.

The initial move has been met with wide-spread criticism and resistance from most avenues.