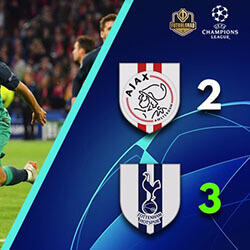 Lucas Moura claimed a game-changing goal in the 19th minute to finish an incredible Tottenham comeback against Ajax, and are now set to enter the Champions League final, where they will be playing against Liverpool.

Starting the game trailing one behind, the Spurs had a difficult start in Amsterdam thanks to ahead in the fifth minute from 19-year-old Ajax captain Matthijs de Ligt, doubling the advantage for Erik ten Hag’s side. Tottenham knocked the post due to a shot from Son Hieung-min before Hakim Ziyech doubled Ajax’s lead on the night thanks to an assist from former Southampton winger Dusan Tadic.

The Spurs were then left at 3-0 behind on the aggregate, but it all quickly changed when Mauricio Pochettino’s team scored two goals within five minutes during the second half of the game. Moura reduced the lead even further thanks to his composed finish before the Brazilian player shot on the turn, and keeper Andre Onana denied Fernando Llorente, levelling the score and leaving the Spurs requiring a single goal to reach the final that will be taking place in June.

In an extremely tight finish, Vertonhen headed up against the bar from four yards, and Moura claimed his third goal thanks to left shot from 16 yards out as the teams were deep into stoppage time, giving the Spurs the win in away goals, and reaching their first Champions League final match. It marks the second all-English final in the tournament’s history.