Arsenal Sticks It To West Brom 2-0 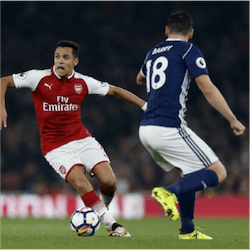 Arsenal’s Alexandre Lacazette scored both goals against West Brom at Emirates Stadium on Monday.  Arsenal’s victory bumps them up into 7th place on the tables – one point behind 4th placed Tottenham and six points behind leaders Manchester City.  West Brom has been demoted into 12th position.  Having scored just four goals this season, the Baggies are now five games sans victory and have won only one of their 12 away league games for the year.

Arsenal’s performance – despite their having come out on top – was shaky at best.  Had it not been for the inclusion of Alexandre Lacazette in the starts it could have been a different situation altogether.  Manager Arsene Wenger’s decision to also grant a start to Sanchez proved to be the right one.  Sanchez proved instrumental in both of Lacazette’s goals.  It was the first time that the duo had started a Premier League game side by side.

Sanchez’s performance had not gone unnoticed by anyone – he enjoyed a standing ovation by the home crowd when he was substituted during the 83rd minute.

Arsenal may have had a very slow start to the season but are slowly regaining some of their former prowess.  Speaking to the press, Martin Keown said that it was the small partnerships that were responsible for building the team – Sanchez and Lacazette, Kolasinac and Ramsey – these were the building blocks of steady improvement.

Tony Pulis Is Disappointed – And It Shows

West Brom boss Tony Pulis has said that he was at peace with the referee’s decision regarding the  penalty despite the way that it all played out in the end.   Pulis had by this stage cooled down considerably after having been absolutely furious in the moment of the referee’s refusal to grant a penalty for Mustafi’s tackle on Rodrigues.  Pulis also disagreed vehemently with the decision that was made to grant a free kick during the build-up to Lacazette’s first goal.

Arsenal also suffered the same fate during the first half of the game when Krychowiak pulled at a corner of the shirt of Sanchez – this penalty was also denied.

West Brom has lost more Premier League games against Arsenal than against any other side – and it’s starting to show in the ever-growing bitter rivalry, mainly from the corner of Pulis.  Pulis really should focus less on his snigger-show and more on playing catch-up with Arsene Wenger’s Arsenal.