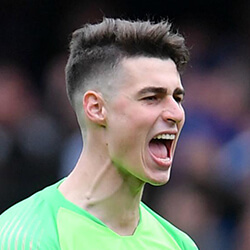 Chelsea edged past Eintracht Frankfurt 4-3 on penalties thanks to Eden Harad’s winning penalty, setting up a Europa League final against Arsenal. Hazard, who was given the choice of playing his final game for the Blues at Stamford Bridge, managed to convert after goalkeeper Kepa Arrizabalaga saved shots from both Goncalo Paciencia and Martin Hinteregger.

Chelsea is now preparing to face Arsenal for the final that’s set to be played in Baku, and the result of the match will mean that both the Europa League and Champions League final will be played exclusively between English clubs this season. It’s the firs time that all four finalists in the top two competitions in Europe are made up entirely from teams of the same nation.

By the end of the first leg, the score was sitting at 1-1, and Chelsea took the lead during the second half thanks to Ruben Loftus-Cheek, who shot into the far corner in the 28th minute, but the game remained difficult for both sides gong forward. Frankfurt levelled the score four minutes after the break with a shot from Luka Jovic, and it was enough to show the weakness in play from Chelsea’s side as the Blues continued to waste time, becoming more restless by the minute.

In extra time, the Germans had two chances cleared off the line, and Chelsea’s Cesar Azpiticueta missed the first penalty shoot-out, but the Blues ultimately left victorious thanks to penalties.