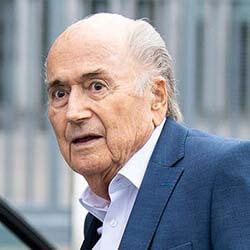 Former FIFA president Sepp Blatter has just been banned for an additional six years and eight months by the organisation’s ethics committee – some seven months before the 85-year-old’s initial ban is due to expire. The disgraced former FIFA president was banned along with former secretary general Jerome Valcke for illicitly paying themselves contractual bonuses to the value of millions of dollars.

The charges brought against Blatter and Valcke included receiving gifts (bribes), conflicts of interest, and significant contraventions of their duty of loyalty towards the sport and the organisation. Both men will begin serving their new bans once their current bans have officially expired. Batter’s initial ban expires in October 2021, and Valcke’s will have been served by October 2025. The men charged and banned in separate cases.

The latest case saw both men fined 1 million Swiss francs, which amounts to about NZ$1.53 million, which fines will have to be settled within 30 days.

The investigations into the illicit bonus allegations were first opened in September 2016, with former FIFA director of finance, Markus Kattner, also last year banned for a period of 10 years for fraudulent activities. All three men are reportedly currently being investigated by Swiss federal prosecutors, while current FIFA president Gianni Infantino is currently at the receiving end of a special investigation by a specialist prosecutor tasked by Swiss lawmakers to assess various criminal complaints levied against former attorney general Michael Lauber.

Valcke has in the meantime been acquitted of all charges related to the accepting of bribes and of general criminal mismanagement during his time at FIFA. He was however found guilty of having forged several documents.