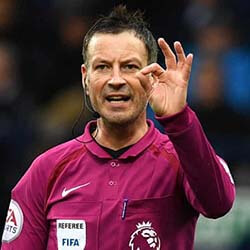 Clattenburg made a controversial string of comments during a recent radio interview when he commented on Sara Cox recently becoming the first female referee in Premiership rugby. Clattenburg’s comments revolved mainly around becoming pregnant during their careers, and how having children can mean long periods away from the game. He said women were ultimately left with having to make a choice between advancing in their careers as referees or having children.

Lashing out in response the Clattenburg’s comments had been, among others, Women in Football CEO Jane Purdon, who said the former EPL referee had a poor sense of judgement on the topic of women in sport, and in particular, pregnant women in sport. Purdon said women across all professions face many challenges in balancing the pressures and expectations of work and family. She said while men faced many of the same challenges, they’re almost never expected to choose between pursuing a career and having a family.

The real problem with Clattenburg’s comments is a general incorrect assumption about the female body and about lazy and outdated gender roles when it comes to early child care, said Purdon in her reaction on Twitter.

Clattenburg made matters even worse when he said a lot of women struggle to pass the same fitness tests men do – and that this too, was the result of long periods away from the sport because of family responsibilities.