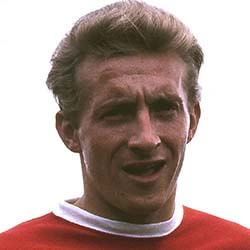 Ex-Manchester United star striker Denis Law has revealed that he’s been diagnosed with dementia. The 81-year-old said this week that he had made the diagnosis public since he wanted to be open about his condition.

Law played for Man-U from 1962 until 1973. His 237 goals scored for the side was only ever bettered by two players, namely Wayne Rooney and Bobby Charlton.

The former striker’s diagnosis is one of two different types of dementia, namely vascular dementia, and Alzheimer’s. The disease is complex and exceptionally problematic, said Law this week, and it’s certainly a diagnosis that’s been made so much worse for so many people by a time marked by social isolation.

Law’s statement regarding his diagnoses has been published on Manchester United’s official website. In the statement, he writes about having a clear understanding about everything happening to his body right now. He also says he realises that there will be days to come when this will not be the case, and that he lives in fear and dread of the time that may very well be coming.

The star striker played for several teams during the heyday of his sporting career. His 30 goals for Scotland was only ever matched by Kenny Daglish – who required 50 games more to achieve the same tally. He’s also spent a stunt playing for Manchester City, as well as for Italy’s Torino.

He says he hopes to raise awareness about dementia while still of clear mind and able to do so.