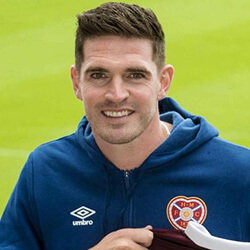 Kyle Lafferty has reportedly ruled himself out of participating in Northern Ireland’s squad for their upcoming game against Austria for the UEFA Nations League.

The Irish striker, who was recently dropped for their Ranger’ match against his former club Hearts, has not travelled to Austria with the rest of his team, after he informed manager Michael O’Neill that he wouldn’t be going with.

O’Neill said that he was contacted by Lafferty who told that he would not be leaving with the Northern Ireland squad as expected. He added that he was disappointed with the choice, and that he has now ruled himself out of the two games he was supposed to take part in.

Lafferty first started Northern Ireland’s UEFA opener match against Bosnia – which ended in a 2-1 home defeat – where he earned his 68th cap, and is one of O’Neil’s most experienced players in the squad.

Northern Ireland is set to take on Austria in Vienna, and then Bosnia in Sarajevo, and the team are hoping to pick up points after their loss in the opener against Bosnia. Lafferty’s absence from the team could allow Rotherham striker Kyle Vassel to have his first go in O’Neil’s squad.

The Milton Keynes-born forward is the latest to be brought into the Northern Ireland team, thanks in part to the efforts of their head scout, Andy Cousins.

Vassel has said that he’s visited Northern Ireland a few times, and that he hopes he can establish himself in the team.